Very Sad Meteor, will one day be very happy Meteor 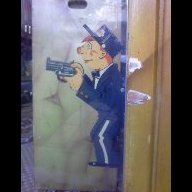 display trays washed and ribbon cables for sound board cables tested and are fine.     display board/door got a tidy up with a freshly zinc plated hinge, and latch

So Rich is doing awesome work on the Meteor ! So we needed to try and get Stern Coin Door Slot parts. So I finally decided it was time to start playing with a 3D printer ! So I bought a printer, watch

and a trial fit of the  front door and surround plates. this door is from an earlier model Stern as you notice there are fewer coach bolts. one of the side plates had an extra hole drilled i