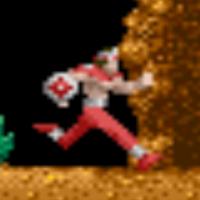 Replaced the Exceleena 2 (gutted) with this Exceleena 1 (original). Replacement Joysticks and buttons to be sourced! Need my MiSTercade already so I can run some vertical games! Until then I'm ju

Thanks to @djsheep , some LS-40's installed with some new Sanwa buttons and we are looking and feeling sweet!